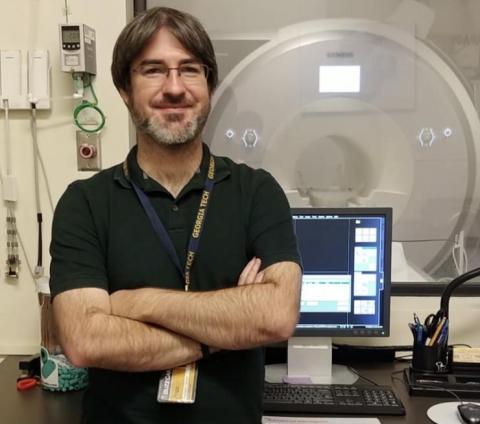 Thackery Brown has always viewed the mysteries of the human mind as “black box problems.” The assistant professor in the School of Psychology specializes in cognitive neuroscience because it enables him “to get behind the curtain and understand why cognition succeeds and fails, and potentially study ways of improving it.”

Cognition, the mental process of acquiring, using, and storing knowledge, will continue to dominate Brown’s research, thanks to a two-year funding grant from the Shurl and Kay Curci Foundation, which has awarded $20 million since its founding in 2006 to research projects that “will lead to significant advances in medicine or scientific knowledge.”

It's part of a busy season for Brown. In addition to the Curci funding, he's just received a research grant from the National Institute on Aging, and he and members of his lab just published a new study on memory recall and spatial navigation.

The Curci grant “is a great honor,” Brown says. “One of the challenges, especially among young scientists, is having opportunities to do research that’s really on the cutting edge of our field. That’s where it’s more high-risk, high-reward. It’s harder to support big ideas, especially when you’re junior faculty, so this is a great opportunity to get at the forefront of the field’s biggest questions.”

A priority for the Curci Foundation is research dealing with neuroscience and brain science, which lends to the title for Brown’s Curci research project: "Establishing the neural mechanisms behind our cognitive maps through development of a virtual reality and closed-loop neurofeedback platform.”

Cognitive maps are how we view the layout of our physical environment in our minds, and learning more about how we construct them and encode the information in them into memory is key to treating Alzheimer’s and other memory-related disorders, as well as the normal aging process.

What Brown has proposed “could potentially change the way we approach memory research,” he says. Brown wants to combine traditional brain imaging tools like magnetic resonance imaging (MRI) and electroencephalography (EEG) with machine learning in a unique way.

“The idea here would be to develop a neurofeedback system, where essentially if we can read out signatures that the brain is attempting to create, we can feed-back stimuli to the brain that can enhance or strengthen those neural signatures.”

Machine learning would allow this to happen in real time. “It could start to interpret neural signals as they’re coming out of the recording device, rather than the researcher needing to go offline and crunch numbers, which is worthless if you’re trying to change someone’s neural function in situ, or as they’re engaged in it.”

In addition to the Curci funding, Brown is also part of a research team whose study, “Episodic memory integration shapes value-based decision-making in spatial navigation”, will soon be published in the Journal of Experimental Psychology: Learning, Memory, and Cognition. The team is made up of Georgia Tech School of Psychology and School of Economics researchers, and the accepted manuscript version of the study was published online April 7.

The team includes postdoctoral fellow Qiliang He, research assistants Elizabeth Beveridge, Lou Eschapasse, and Vanessa Vargas, all from the School of Psychology; and doctoral candidate Jancy Liu from the School of Economics. All are members of Brown’s Memory Affect Planning (MAP) Lab.

Spatial navigation — knowing where you are, how you got there, and how to get to another destination — is a key cognitive ability. Brown’s research team wanted to know what factors go into the choices humans make when navigating based on memories. Participants learned where various objects were in a virtual environment, and then decided whether to reach those goals from familiar starting locations or unpredictable ones,

“We created a (computational) model of just how much people were integrating prior experiences into their current choices,” Brown says. “We’re hopeful this is a new tool for the field. It may be used for other types of tasks like interpreting neuroimaging data, for example — how much of this behavior or brain activity is being influenced by prior experiences?”

Brown says the recent study is similar to the kind of research he’ll work on with the Curci funding. “What we want to do in the Curci award is try to strengthen people’s mental maps of their environments. The current theory that people broadly hold is that our cognitive maps of environments really come about by integrating different (memory) episodes. When you have two navigational experiences and they cross paths, you stick them together and you start to build a little map.”

The published study tries to determine how good people are in integrating all their different experiences into their cognitive maps, and the decisions that are then made based on that information. “In the Curci award, we want to try to zoom in on the neural signature of the maps themselves, and try to strengthen them to lead to better performance.”

Brown says the NIA research mission is related to the Curci award. While that grant is more concerned with state-of-the-art method development and understanding cognitive map neural signals by manipulating them, the NIA grant focuses on how the structure of our environment, like the layouts of buildings and roads, is stored by the brain.

“The grant also asks two questions,” Brown adds. “Can we understand individual differences in navigation ability by studying the way our brain stores this structure information? And can differences in how people's spatial memory declines with age be understood in part by how fragmented their neural maps of their environment are?

“This is another huge honor for me. It will support my lab and research program for five years, and combined with the Curci this support touches on many of the big questions about how humans are able to plan and navigate their lives.”