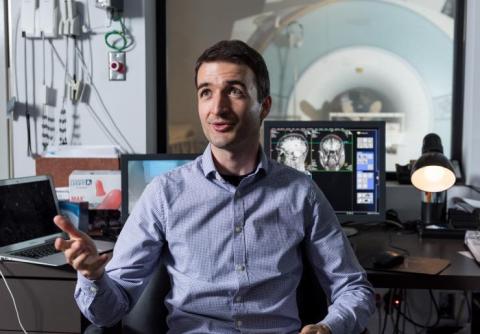 This story first appeared in the Vision Sciences Society newsroom.

The Elsevier/VSS Young Investigator Award, sponsored by Vision Research, is given to an early-career vision scientist who has made outstanding contributions to the field. The nature of this work can be fundamental, clinical, or applied. The award selection committee gives highest weight to the significance, originality and potential long-range impact of the work.

The selection committee may also take into account the nominee’s previous participation in VSS conferences or activities, and substantial obstacles that the nominee may have overcome in their careers. The awardee is asked to give a brief presentation of her/his work and is required to write an article to be published in Vision Research.

The 2022 Elsevier/VSS Young Investigator Award goes to Professor Dobromir (Doby) Rahnev for fundamental contributions to our understanding of perceptual decision making and visual metacognition. Rahnev is an associate professor in the School of Psychology at Georgia Tech. After finishing his Bachelor’s degree in Psychology at Harvard University, Rahnev obtained his Ph.D. at Columbia University with Hakwan Lau and completed a postdoctoral fellowship at UC Berkeley with Mark D’Esposito.

Rahnev’s research seeks to uncover the computational and neural bases of perceptual decision making. He studies the top-down processes that modulate the normal visual experience, using a combination of neuroimaging, brain stimulation, psychophysics, and computational modeling.

His early pioneering work on attention-related subjective biases has inspired new lines of investigation and stimulated debates among philosophers. In another influential line of studies, Rahnev used a combination of brain stimulation and neuroimaging to demonstrate the existence of a hierarchical structure in the prefrontal cortex such that progressively rostral regions control later stages of perceptual decision making.

His more recent work has uncovered the sources of suboptimality in perceptual decision making and developed improved models of visual metacognition.

Rahnev has received an impressive series of grants from NIH, NSF, and the Office of Naval Research and mentored many graduate students and postdocs. He has also spearheaded several large collaborative efforts, such as creating the Confidence Database and organizing a consensus paper where researchers in visual metacognition agreed on shared goals.

Rahnev will speak during the VSS 2022 Awards session:

"Perceptual decision making is the process of choosing a course of action based on the available sensory evidence. This process begins with a stimulus that is internally represented in the visual system. Based on the internal representation, a person makes a decision and can also evaluate this decision via a confidence rating.

Progress on perceptual decision making ultimately requires an understanding of the stimulus, the internal representation, the decision, and the confidence in the decision. This talk will focus on recent work that begins to reveal the computations that link all these components together.

I will show how previously unexplained response biases emerge from individual differences in the internal representation. I will also present a new process model of confidence that allows the unbiased measurement of metacognitive ability and fits empirical data better than existing alternatives.

I will end by highlighting exciting new developments in the field that promise to revolutionize our understanding of the computations underlying perceptual decision making."