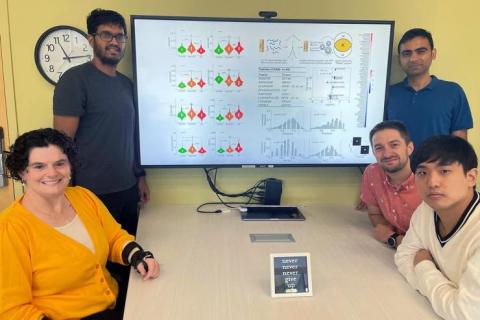 Throughout her engineering education and research career, Cassie Mitchell hasn’t seen many role models who look like her.

Mitchell developed a neurological condition at 18 that has resulted in quadriplegia, and she rarely has encountered other professionals in STEM fields with similar disabilities. That’s made it imperative to her to be the role model she didn’t have.

“As a disabled professor, I want students from diverse backgrounds and disabilities to feel empowered and included,” Mitchell said, “and to know they have professors who can relate to them.”

The assistant professor in the Wallace H. Coulter Department of Biomedical Engineering at Georgia Tech and Emory University has made a point to involve students from all kinds of backgrounds and with all kinds of abilities in her lab — from high school interns to Ph.D. students.

She’ll get to build on those efforts as one of the first awardees under an initiative from the Chan Zuckerberg Initiative and the National Academies of Science, Engineering, and Medicine to recognize and support excellent early career biomedical researchers who have a record of promoting diversity, equity, and inclusion. The Science Diversity Leadership award program includes $1.15 million in grant funding over five years. The organizations announced the initial round of recipients Oct. 19.

“To increase diversity, equity, and inclusion in the biomedical sciences, we must do everything possible to attract, retain, and nurture top talent at our colleges and universities,” National Academy of Sciences President Marcia McNutt said earlier this year when the initiative was launched. “We are pleased to partner with the Chan Zuckerberg Initiative on this effort, which will recognize and encourage faculty who make mentorship and stewardship a top priority in their academic programs.”

Mitchell will use the funding to support her lab’s efforts to develop large-scale biomedical data integration and machine learning methods to identify features that explain health disparities or improve disparities in health outcomes.

“The Science Diversity Leaders program will enable us to focus on data integration and machine learning technology specifically aimed at predictive medicine for rare diseases and diseases where there are known health outcome disparities. Such rare diseases and underrepresented populations are often under-funded through traditional programs in academia or industry,” Mitchell said. “The program also will expand my ability to mentor even more underrepresented students in our large predictive medicine research internship program.”

Mitchell’s lab is indeed large: She estimated she has mentored and advised more than 160 students in the last five years, including a significant number of minority students and students with disabilities.

In addition to undergraduate researchers, she has an active internship program for high schoolers from historically underrepresented backgrounds that will get a boost from the Chan Zuckerberg Initiative grant. And all of those students get the benefit of Mitchell’s guidance as well as the Ph.D. students she advises, she said.

“You may have heard the saying, ‘It takes a village to raise a child.’ I believe scientific mentoring is the same,” Mitchell said. “I strongly believe in individual mentoring meetings between the principal investigator and the student. However, I also believe it is crucial that students have peer mentors within the lab, research teams within the lab with structured student leadership, as well as external professional development through scientific meetings and specialized programs.

“Students and early stage investigators need an entire network of supportive mentors who have a diverse set of experiences, viewpoints, and ideas.”

Along with their leadership on efforts to diversify the pipeline of future scientists, award winners have made significant research contributions to the biomedical sciences and show promise for continuing scientific achievement.